国际英语新闻:Italy to boost investment in Tunisia to stem illegal immigration

Salvini, on his first official visit to Tunisia, told a press conference that he believes "the relatively high unemployment rate in Tunisia remains the main reason for the increase of illegal immigration." 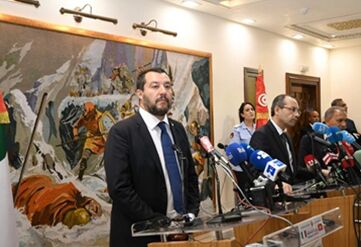 Italy is determined to "strengthen the legal channels of immigration between the two Mediterranean countries through investment in Tunisia, in addition to the creation of jobs essentially in southern Tunisia," said Salvini.

For his part, Fourati said that his meeting with his Italian counterpart was an opportunity to address issues of common interest, essentially more coordination in the fight against crime and terrorism.

"We talked about the tools that could be used to deal with human trafficking networks through illegal immigration that cost the lives of our young people, off the Mediterranean," Fourati said.

Fourati said Tunisian authorities had detained no less than 500 individuals convicted of involvement in human trafficking cases by Sept. 20 this year.

The number of illegal Tunisian immigrants leaving home country has reached 4,000 so far this year, according to International Organization for Migration (IOM) in Tunisia.