The Seoul Central District Court decided to put Lee, who served his five-year presidential term through early 2013, under custody as he denied almost all of alleged wrongdoings, and even basic facts found through an investigation.

The denial raised a possibility for destroying evidence, and many of Lee's offences were justifiable, the court said. 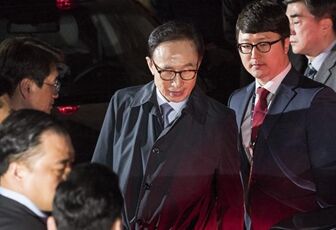 Lee posted a message in his social media account after the arrest decision, saying he is responsible for everything though he tried his best during his presidency.

Lee was summoned last week for questioning, and the Seoul Central District Prosecutors' Office requested a warrant Monday to arrest him for multiple charges, including bribery, embezzlement, tax evasion and slush fund creation.

The former president refused to present himself in the court to be arraigned, saying he already clarified his position while being grilled by prosecutors. The court made the detention decision by examining documentary evidences and testimonies provided by prosecutors.

Lee had awaited the court's decision at home in central Seoul. Senior prosecutors came and took him by passenger car to a detention center in southern Seoul.

Lee's arrest came about a year after former President Park Geun-hye, Lee's successor, was detained last March after her impeachment over an influence-peddling scandal involving her longtime friend Choi Soon-sil.

Prosecutors demanded 30 years in jail for Park, who was detained for her dismissal of all charges levied against her. A Seoul court will hand down a ruling on the country's first-ever impeached president next month.

Lee was charged with taking tens of millions of U.S. dollars in bribes from the country's intelligence agency and big corporations including Samsung Electronics.

Samsung is alleged to have paid 5 million U.S. dollars of retaining fee, on Lee's behalf, in the United States for DAS, a South Korean auto parts maker which prosecutors said Lee owns under the names of his relatives.

In exchange for the payment, Samsung Electronics Chairman Lee Kun-hee is believed to have bought a presidential pardon in 2009 when the Samsung chairman, currently in hospital, got a suspended jail sentence for tax evasion.

The charge related to DAS dated back to 1999 when the company invested 19 billion won (17 million U.S. dollars) in establishing investment consulting firm BBK, which faced a legal lawsuit for stock price manipulation in 2001.

In the United States, DAS filed a lawsuit against a former BBK president and received 14 billion won (13 million U.S. dollars) in damages through the former BBK head's personal bank account in February 2011 when Lee was in office.

Samsung paid the legal fee on behalf of DAS, and Lee granted a pardon only to the Samsung chairman in December 2009.

DAS is at the center of the ongoing criminal investigation. If prosecutors prove Lee is the real owner of the company, he can be convicted of bribery, embezzlement, tax evasion and the creation of slush fund, which is believed to have been funneled into Lee for his presidential campaign.

The National Intelligence Service (NIS), the country's spy agency, is believed to have delivered secret operation fund in kickbacks to Lee's office at his behest through his closest aides, some of whom admitted the allegation.

Lee is also accused of dodging taxes by owning real estate assets and bank deposits under borrowed names, while illegally moving classified government documents to a warehouse of his private office.